Trigeminal nerve is one of the twelve cranial head nerves, which has three divisions ophthalmic, maxillary, and mandibular and it is also a largest cranial nerve.

The ophthalmic, or upper, branch supplies sensation to most of the scalp, forehead, and front of the head. The maxillary, or middle, branch stimulates the cheek, upper jaw, top lip, teeth and gums, and to the side of the nose. The mandibular, or lower, branch supplies nerves to the lower jaw, teeth and gums, and bottom lip.More than one nerve branch can be affected by this disorder.

Dentist to give anesthesia while doing procedure on teeth often injects one of the branches of the Trigeminal. Trigeminal neuralgia (TN) also called TIC DOULOUREX is a disorder of the 5th cranial nerve.  TN causes sudden shock-like facial pains, typically near the nose, lips, eyes or ears.

The typical or “classic” form of the disorder (called “Type 1” or TN1) causes extreme, sporadic, sudden burning or shock-like facial pain that lasts anywhere from a few seconds to as long as two minutes per episode.

These attacks can occur in quick succession, in volleys lasting as long as two hours.  The “atypical” form of the disorder (called “Type 2” or TN2), is characterized by constant aching, burning, stabbing pain of somewhat lower intensity than Type 1.It is said to be the most excruciatingly painful human condition in the world.  TNA’s origin is unknown, but it is often attributed to abnormal blood vessels that compress the nerve, multiple sclerosis, or tumors.

TN is often misdiagnosed as a toothache or TMJ and often they undergo multiple dental procedure or teeth removal.

TN disorders are considered impairments, which can limit an individual’s ability to function on the job.

Pain typically runs in cycles, and it is common for individuals with TN to experience periods of remission. Remission can last for weeks, months, and even years.

Over time, the attacks tend to worsen with fewer and shorter pain-free periods.

TN is often caused by loss of or damage to the nerve’s protective coating, myelin. Myelin damage results from irritation of the nerve, usually a blood vessel that causes the nerve to be compressed.

TN diagnosis is based primarily on the person’s history and description of symptoms, along with results from physical and neurological examinations.

To rule out other sources of facial pain, doctors typically order a magnetic resonance imaging (MRI) scan. Compression of the nerve by a vessel can sometimes be seen on a MRI.

It is normally treated with anticonvulsants.  Tegretol (carbamazepine) is often the most effective treatment. If these medications become ineffective or the side-effects become intolerable, surgical treatment may be offered.

Microvascular Decompression Surgery (MVD): This procedure removes the cause of the TN pain.  The MVD offers the best chance of long-term relief without damaging the nerve.

This is an open surgical approach where a small incision is made behind the ear, a small hole is drilled in the skull, and, under microscopic visualization, the trigeminal nerve is exposed.

In most cases, there is a blood vessel (typically an artery, but sometimes a vein) compressing the trigeminal nerve. By moving this blood vessel away from the nerve and interposing a padding made of Teflon felt, the pain is nearly always relieved.

Overall recovery from surgery occurs within 7 days and patient can resume his work on 10th day.

Damaging the nerve: Several procedures can be done to stop the transmission of pain signals to the brain. These procedures actually cause damage to the nerve and relief is obtained. Pain relief do not last for long time and recurrence is very common and often patient has to undergo surgery.

In this procedures needle is passed through cheek in to the nerve and glycerol injections, balloon compression or radiofrequency lesioning is done.

Hemifacial spasm (HFS) is a rare neuromuscular disease characterized by irregular, involuntary muscle contractions (spasms) on one side (hemi-) of the face (-facial). The facial muscles are controlled by the facial nerve (seventh cranial nerve), which originates at the brainstem and exits the skull below the ear where it separates into five main branches.

These tics are usually not painful, although they can be uncomfortable, and they are usually not life-threatening. But they are distressing to the patient, and as the condition worsens the tics can become more and more frequent and intrusive.

Hemifacial spasm can affect both men and women, but it is most common in middle-aged and older women; its incidence is also higher among Asian people In typical form, the twitching usually starts in the lower eyelid in orbicularis oculi muscle.

As time progresses, it spreads to the whole lid, then to the orbicularis oris muscle around the lips, and buccinator muscle in the cheekbone area.

Most instances of hemifacial spasm previously thought to be idiopathic were probably caused by aberrant blood vessels (eg, distal branches of the anterior inferior cerebellar artery or vertebral artery) compressing the facial nerve within the cerebellopontine angle. Less than 1% of cases are caused by tumor. There is a slight female preponderance. Idiopathic hemifacial spasm typically begins in the fifth or sixth decade of life. Onset of hemifacial spasm in patients younger than 40 years is unusual and often associated with an underlying neurologic illness such as multiple sclerosis. Fatigue, anxiety, or reading may precipitate the movements.

Magnetic resonance imaging is the imaging study of choice, especially if an underlying compressive lesion is suspected. Ectatic blood vessels rarely are identified, and it is difficult to correlate vessels with the facial nerve.

In most patients with hemifacial spasm, the treatment of choice is injection of botulinum toxin under electromyographic (EMG) guidance. Chemodenervation safely and effectively treats most patients, especially those with sustained contractions. Relief of spasms occurs 3-5 days after injection and lasts approximately 6 months. It has a success rate equal to that of surgery, but repeated injections may be required every 3 to 6 months. The injections are administered as an outpatient or office procedure.

Whilst the toxin is expensive, the cost of even prolonged courses of injections compares favourably with the cost of surgery.

The goal of this surgical procedure is to reposition the artery that irritates the nerve as it comes out of the brainstem, stopping the spasms at their source. Microvascular decompression is a type of advanced microsurgery.

In a microvascular decompression, which is performed under general anaesthesia, the neurosurgeon makes a small incision behind the ear and then a small opening (about one inch) in the skull. This allows the surgeon to see the small blood vessel that is pressing on the facial nerve.

Once the surgeon locates the site of the compression, the blood vessel is lifted away from the nerve.

The surgeon inserts a tiny pad on the nerve to prevent further contact with the blood vessel, then closes the incision.

It is very important that an experienced surgeon perform this procedure — there is often more than one blood vessel pressing on the nerve, and it’s important to locate and repair all of them in order to stop the spasms.

Excellent to good results are reported in 80% or more cases with a 10% recurrence rate.

Medications used in the treatment of hemifacial spasm include carbamazepine and benzodiazepines for noncompressive lesions. Carbamazepine, benzodiazepines, and baclofen also may be used in patients who refuse botulinum toxin injections or surgery. 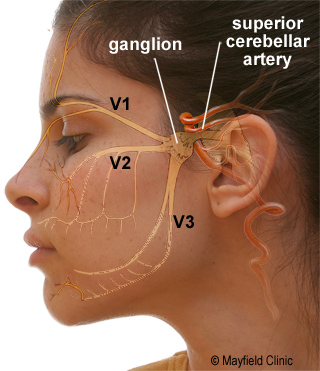