Meningiomas are a diverse set of tumors arising from the meninges, the membranous layers surrounding the central nervous system. Many meningiomas produce no symptoms throughout a person’s life, and if discovered, require no treatment other than periodic observation. Typically, symptomatic meningiomas are treated with either radiosurgery or conventional surgery.

Meningiomas are often benign tumors arising from the coverings of the brain and spinal cord. They arise from the arachnoid “cap” cells of the arachnoid villi in the meninges. They represent about one-third of all primary brain tumors and occur most frequently in middle-aged women. Meningiomas usually grow inward, causing pressure on the brain or spinal cord. They also can grow outward toward the skull, causing it to thicken. Most meningiomas are benign noncancerous and slow-growing tumors.

Although meningiomas are referred to as brain tumors, they do not grow from brain tissue. They arise from the meninges, which are three thin layers of tissue covering the brain and spinal cord. These tumors are most often found near the top and the outer curve of the brain. Tumors may also form at the base of the skull.

Different Location in The brain are

These grow on the surface of the brain, often toward the front. They may not produce symptoms until they reach a large size. Symptoms of a convexity meningioma are seizures, focal neurological deficits such as monoparesis, hemiparesis, or headaches.

The falx is a groove that runs between the two sides of the brain i.e. cerebral hemisphere, and contains a large blood vessel (sagittal sinus). Parasagittal tumors lie near or close to the falx. Because of the danger of puncturing the blood vessels, removing a tumor in the falx or parasagittal region can be difficult. Large parasagittal meningiomas may result in bilateral leg weakness.

Olfactory groove meningiomas grow along the nerves that run between the brain and the nose. These nerves allow you to smell, and so often tumors growing here cause loss of smell. If they grow large enough, olfactory groove meningiomas can also compress the nerves to the eyes, causing visual symptoms. Similarly, meningiomas growing on the optic nerve can cause visual problems, including loss of patches within your field of vision, or even blindness. They can grow to a large size prior to being diagnosed due to changes in the sense of smell and mental status changes being difficult to recognize.

These meningiomas lie behind the eyes. These tumors can cause visual problems, loss of sensation in the face, or facial numbness. Tumors in this location can sometimes involve the blood sources of the brain (e.g. cavernous sinus, or carotid arteries), making them difficult or impossible to remove completely.

Suprasellar meningiomas grows in central part of brain above the sella which contains pituitary gland. They compress and displaces optic nerve and causes visual loss. They can also grow and invade important arteries supplying blood flow to the brain such as Internal carotid artery and its branches namely Middle cerebral artery and Anterior cerebral artery making their total resection difficult and some times impossible.

These arises in posterior part of brain can cause headaches, or other signs cerebellar compression such as difficulty walking.

Intraventricular meningiomas are associated with the connected chambers of fluid that circulate throughout the central nervous system. They can block the flow of this fluid causing pressure to build up, which can produce headaches and dizziness.

Intraorbital meningiomas grow around the eye sockets of the skull and can cause pressure in the eyes to build up, resulting in a bulging appearance. They can also cause an increasing loss of vision.

Spinal meningiomas account for less than 10 percent of meningiomas. They tend to occur in women (with a female/ male ratio of 5 to 1), usually between the ages of 40 and 70. They are intradural (within or enclosed within the dura mater), extramedullary (outside medulla or spinal cord) tumors occurring predominantly in the thoracic spine. They can cause back pain, or pain in the limbs from compression of the nerves where they run into the spinal cord.

Meningiomas account for about 36.1% of all primary brain tumors, which are tumors that form in the brain or its coverings. They are most likely to be found in adults older than 60; the incidence appears to increase with age. Rarely are meningiomas found in children. They occur about twice as often in women as in men.

Researchers are studying meningiomas carefully to find out what causes them. Between 40% and 80% of meningiomas contain an abnormal chromosome 22. The cause of this abnormality is not known.

Meningiomas usually grow slowly, and may reach a large size before interfering with the normal functions of the brain. The resulting symptoms depend on the location of the tumor within the brain. The most common symptoms are,

Surgery and radiation are the most common forms of treatment for meningioma.

Surgery is the primary treatment for meningiomas, although some tumors may not be removed this way. For tumors in favourable locations, up to 85% of meningiomas are curable with surgery. Location, the amount of the tumor left after surgery, and the skill of the neurosurgeon are the important elements in predicting a successful result.

The major clinical factor in recurrence is the extent of resection/ removal. How completely the surgeon is able to remove the tumor is highly impacted by the location of the tumor, whether it is adjacent or attached to anything else, and the age of the patient. The probability of a tumor recurring or growing after surgery may be estimated by comparing the tumour’s WHO (World Health Organization) grade and by the extent of surgery by the Simpson Criteria.

Radiation therapy may be used to tumors that cannot be removed with surgery, tumors that are not completely removed in surgery, malignant/anaplastic tumors, or recurrent tumors.

Careful observation is sometimes the best course of action for patients with meningioma with small incidentally detected tumour on imaging done for other purpose or with old age or if surgery is not possible due to other comorbidities. Scans are performed at regular intervals during this time.

For tumors in favourable locations, up to 85% of meningiomas are curable with surgery. Location, the amount of the tumor left after surgery, and the skill of the neurosurgeon are the important elements in predicting a successful result. 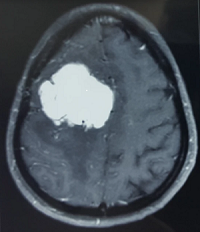 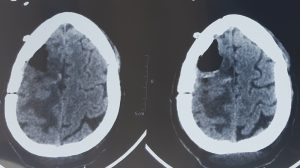