A brain tumor or intracranial neoplasm occurs when abnormal cells form within the brain. There are two main types of tumors: malignant or cancerous tumors and benign tumors.Cancerous tumors can be divided into primary tumors that start within the brain, and secondary tumors that have spread from somewhere else, known as brain metastasis tumors.All types of brain tumors may produce symptoms that vary depending on the part of the brain involved.These symptoms may include headaches, seizures, problem with vision, vomiting, and mental changes.The headache is classically worse in the morning and goes away with vomiting.More specific problems may include difficulty in walking, speaking, and with sensation.As the disease progresses unconsciousness may occur.

Low grade astrocytomas usually grow slowly over a period of time. These tumours can arise anywhere in the brain or spinal cord. The most common areas for them to occur are the cerebral hemispheres (frontal, parietal, temporal lobes) and the cerebellum. Tumours can be solid or part cystic.

The grade I gliomas in this class are pilocytic astrocytoma (PA), dysembryoplastic neuroepithelial tumor (DNET), pleomorphic xanthoastrocytoma (PXA), and ganglioglioma. These are benign tumours.

The grade II gliomas are brain tumors that come from two different types of brain cells known as astrocytes and oligodendrocytes. making them the slowest growing type of glioma in adults. The most common symptom caused by low grade gliomas are seizures. The other symptoms are headache, nausea and vomiting, diminished consciousness, weakness or numbness, and loss of mental sharpness or difficulty concentrating.

The diagnosis of brain tumour is done using either magnetic resonance imaging (also known as an MRI) or computed tomography (CT or CAT scan). A major difference between an MRI and a CT scan is that the MRI uses a magnet to image the brain, while CT uses x-rays. Both give a detailed image of the brain’s structure, and both can usually show the presence and location of a tumor.

Low grade gliomas are usually treated with a combination of surgery, observation, and radiation.

If the tumor is located in an area where it is safe to remove, then the surgery is done and attempt is made to remove the tumour as much as possible. Sometimes the treatment include only monitoring of the tumor with MRI scans every few months. If the tumor appears to be growing then surgery is considered along with radiotheraphy.

A stereotactic biopsy may be done where small sample may be removed from the tumor by stereotactic needle biopsy, which involves the insertion of a needle through the skull into the precise area of the tumor using stereotactic frame and CT guidance.

Low-grade gliomas grow into normal brain, and there is often no distinct boundary between the tumor and normal brain. As a result, efforts to remove all tumor cells inevitably remove some of the normal brain and can leave behind tumor cells. The amount of tissue removed and whether surgery is possible are also influenced by the location of the tumor within the brain. If the tumor is in an area of the brain controlling one or more critical functions (eg, swallowing), surgery may result in severe damage. In this setting surgery may be contraindicated.

The remaining glioma cells continue to grow, eventually causing additional damage to the remaining normal brain, and a recurrence of symptoms. Thus, surgery, even when extensive, rarely results in cure of adults with low-grade glioma.

Radiation therapy (also called radiotherapy or x-ray therapy) uses high energy x-rays that are carefully aimed at the area of the brain affected by the tumor. Radiation therapy is generally given in a series of treatments over several weeks

Radiation can be given after surgery, with the objective of eradicating tumor cells that were not removed at the time of surgery. The effectiveness of immediate radiation therapy after surgery is unclear.

The most common side effect is damage to the surrounding normal brain cells, resulting in gradually worsening impairment of mental sharpness and ability to think and concentrate (called impaired cognition).

Regardless of the initial form of therapy, low-grade gliomas generally progress over time; the time frame may be long, sometimes as long as ten years or more after the original diagnosis. The tumor may also develop an aggressive (more malignant) phase after a variable period of time. This aggressive phase is characterized by more rapid tumor growth and progressive worsening of tumor-related symptoms.

Treatment options are limited in the late phases of the disease since surgery and radiation therapy are unlikely to be useful or possible. In such cases, chemotherapy may be considered. 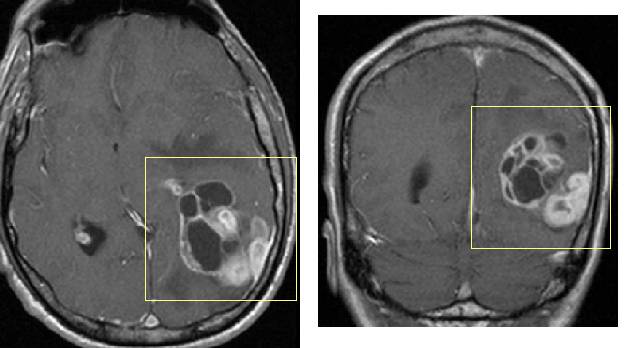