Three most common causes of TBI are the following:

Diffuse or Focal. Diffuse injuries are characterized by microscopic damage throughout many areas of the brain. Forces exerted on the brain tissues cause damage to the axons—the “wires” that enable nerve cells to communicate with each other.

A focal brain injury is confined to a specific area of the brain and causes localized damage that can often be detected by CT Scan.

A diffuse axonal injury (DAI) causes shearing of large nerve fibres causing damage to to the axon of nerves and stretching of blood vessels causing bleeding in many areas of the brain.

In addition to bleeding, this type of injury can trigger a biochemical cascade of toxic substances in the brain during the days following the initial injury.

DAI is a frequent result of traumatic acceleration/deceleration or rotational injuries and a frequent cause of persistent vegetative state in patients. In fact, DAI represents approximately one half of all intra-axial traumatic lesions.

This lesion is the most significant cause of morbidity in patients with traumatic brain injuries, which most commonly result from high-speed motor vehicle accidents.

Focal contusions are bruises that cause swelling, bleeding, and destruction of brain tissue.

They typically occur in the frontal and temporal lobes, where memory and behaviour centres are located. Less often, they occur in the parietal and occipital lobes.

These injuries can be exacerbated by other injuries to the body that further reduce the amount of oxygen entering the bloodstream through the lungs.

Types of Haemorrhage in TBI

A cerebral or intracranial (inside the skull) haemorrhage occurs when blood leaks from a damaged vessel into brain tissue.

The size of a haemorrhage can range from tiny to large and symptoms depend on the size and location of the damage.

Bleeding usually develops within minutes of a TBI but it can develop hours to days after the initial injury.

A subdural hematoma (SDH) is slow bleeding outside the brain, usually over the surface of the frontal or parietal lobe.

Typically, it is caused by damage to a vessel carrying venous blood.

An acute hematoma may develop slowly, taking minutes to days to manifest.

If large enough, it can exert a dangerous amount of pressure on the brain, necessitating surgery to drain the accumulated blood and relieve pressure.

An epidural hematoma (EDH) occurs outside the brain and is usually caused by a damaged artery. Arteries carry blood under high pressure; therefore, a large EDH can cause pressure to build up within minutes, even seconds.

Subarachnoid haemorrhage (SAH) refers to a small amount of bleeding that spreads thinly over the surface of the brain.

This usually is an incidental finding detected on a CT scan and has little significance.

SAH is more significant when caused by the bursting of an aneurysm (weakened blood vessel) in the brain, such as during a stroke.

Contusion is a type of traumatic brain injury that causes bruising of the brain.

These bruises are caused when small blood vessels bleed into the brain tissue.

This can lead to an increase in the pressure inside the cranium, referred to as the ICP, or intracranial pressure

The increased pressure can cause damage to the brain.

In some cases, contusions can heal on their own without medical intervention, although a large contusion may require surgery. 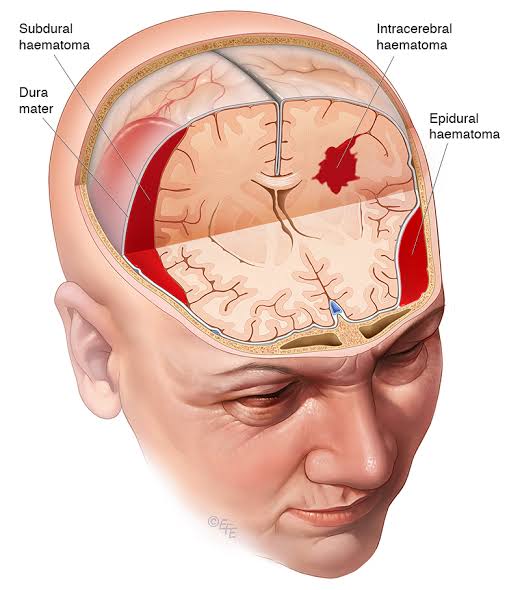