A GBM is the most common and most aggressive malignant primary brain tumour. Most of these tumours occur in the cerebral hemispheres but can develop in other parts of the brain such as the corpus callosum, brainstem or spinal cord. The cells of these tumours grow quickly, are not well defined, and can spread throughout the brain.

The kind of symptoms produced depends highly on the location of the tumour.

The first treatment step is surgery to remove as much tumour as possible. Surgery is almost always followed by radiation. As glioblastoma wildly invade and infiltrate normal surrounding brain tissue it is impossible to completely excise the tumour. The primary objective of surgery is to remove as much of the tumor as possible without injuring the surrounding normal brain tissue needed for normal neurological function (such as motor skills, the ability to speak and walk, etc.). However, GBMs are surrounded by a zone of migrating, infiltrating tumor cells that invade surrounding tissues, making it impossible to ever remove the tumor entirely. Surgery, provides the ability to reduce the amount of solid tumor tissue within the brain, remove those cells in the center of the tumor that may be resistant to radiation and/or chemotherapy and reduce intracranial pressure. Surgery, by providing a debulking of the tumor, carries the ability to prolong the lives of some patients and to improve the quality of remaining life.

Patients undergoing chemotherapy are administered special drugs designed to kill tumor cells. Chemotherapy with the drug  Temozolomide is the current standard of treatment for GBM. The drug is generally administered every day during radiation therapy and then for six to 12 cycles after radiation. Each cycle lasts for 28 days, with Temozolomide given the first five days of each cycle, followed by 23 days of rest. While the aim of chemotherapy is long-term tumor control, it does so in only about 20 percent of patients. The decision to prescribe other forms of chemotherapy for tumor recurrence is based on a patient’s overall health, type of tumor and extent of the cancer. Before considering chemotherapy, patients should discuss it with their oncologists and/or neuro-oncologists.

Because surgery, radiation and chemotherapy are unlikely to result in a prolonged remission of GBM tumors, researchers are always investigating the use of innovative new treatments when the first line therapy has failed. These new treatments are done in clinical trials. A number of these treatments are available on an investigational basis at centers specializing in brain-tumor therapies. These include gene therapy, highly focused radiation therapy, immunotherapy and chemotherapies utilized in conjunction with vaccines.

For brain tumour patients, a prognosis depends on several factors, which can include age and other health issues, the size of the tumour, its molecular profile, the type of tumour, how much can be removed and its response to treatments such as chemotherapy and radiation therapy. 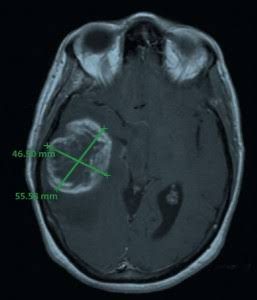