A cerebral aneurysm is a weakness in the wall of a blood vessel in the brain. Aneurysms can be a congenital defect or can develop later in life from conditions such as hypertensive vascular disease or atherosclerosis.

A burst or ruptured aneurysm allows blood to go into the brain. When the blood supply to part of the brain is reduced or completely blocked, a stroke may occur. The part of the brain deprived of blood dies and can no longer function.

In addition to physical and neurological examinations, neurosurgeons may request a scan of the brain to help locate the bleeding or a lumbar puncture to see how much blood has mixed with the cerebrospinal fluid.

An angiogram can pinpoint the aneurysm or AVM. A magnetic resonance image scan or MRI can be used to locate an aneurysm or AVM that has not yet bled.

The patient may require an evaluation of neurologic injury or an electroencephalogram for seizures.

Cerebral aneurysms and AVMs are often emergencies by the time they are discovered. The aim of treatment once a hemorrhage has occurred is to stop the bleeding and damage to the brain and to reduce the risk of recurrence.

The weeks immediately following the hemorrhage are most important since that is the period when complications occur and re-rupture most likely.

Neurosurgery may be able to repair or clip the ruptured aneurysm to reduce the risk of additional bleeding. They may also repair additional unbroken aneurysms if possible.

If direct neurosurgery is too risky, endovascular surgery may be performed to insert tiny coils or balloons to stop the blood flow. Other treatment includes complete bed rest and medications for headaches, seizures or other problems.

Treatment may include speech, physical and occupational therapy, depending on the neurologic injury.

Few warning signs precede an aneurysm or AVM until bleeding occurs. Aneurysm symptoms after a rupture may include sudden and severe headache, vision or speech impairment, loss of consciousness, seizures, weakness on one side, numbness or tingling, and nausea and vomiting.

Recurrent headaches can be an indication of a small amount of bleeding in an AVM prior to a serious hemorrhage. Other symptoms include seizures and neurological problems such as paralysis or loss of speech, memory or vision, depending on the location of the AVM. Other symptoms can involve changes in mental capacity. It is important to discuss any symptom with your primary care physician to determine if a neurosurgeon is needed. 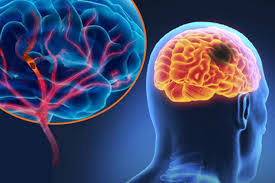